While his advisees have been busy designing their projects and securing data for their senior theses, MMSS senior seminar professor Joe Ferrie has been busy with his own research.  When thinking about how to address the persistence of poverty, one of the big questions is: How do family traits shape wealth and well-being from one generation to the next? In two recent working papers, Professor Ferrie is evaluating a 182-year-old experiment, Georgia’s Cherokee Land Lottery of 1832, to analyze how a sudden influx of wealth affects families over time.  Read more. 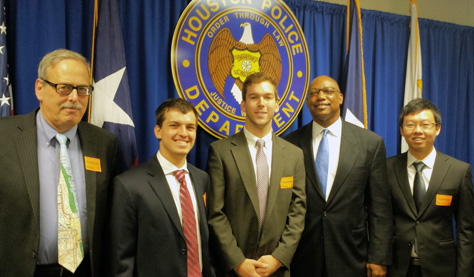 Dr. Mark Iris has an unusual background for an NU faculty member: he served as Executive Director of the City of Chicago Police Board for 21 years.  During his time working with the Chicago Police, he began to note that major police agencies collect massive quantities of data, but often lack funding and staff with the necessary skills to analyze these data and make full use of them to improve police operations and service to the public.  During those same years, Dr. Iris was teaching part time at Northwestern, and learned of the MMSS Program. He realized a perfect match was in the making: students with strong statistical skills in need of data, and police agencies with lots of data but short on personnel with statistical skills.

Under Dr. Iris’ direction, MMSS seniors have done research for the police departments in Los Angeles, Long Beach, Philadelphia, San Antonio and Houston.  Students are both meeting a crucial MMSS degree requirement (a senior thesis) while also providing a real public service.  The work of a recent MMSS research team was published in the June 2014 issue of The Police Chief, one of the most widely distributed policing periodicals in the US for police executives.  The article describes how the student research is conducted in general as well as details the implications of the Houston research in particular.  Read full article.